This site uses cookies and other tracking technologies to provide you with our services, enhance the performance and functionality of our services, analyze the use of our products and services, and assist with our advertising and marketing efforts. Cookie Policy   Privacy Notice

Where Plasma Makes the Cut

*This article was originally published in the July 2019 issue of MetalForming Magazine. For more information, visit MetalFormingMagazine.com, a publication of the Precision Metalforming Association. By Louis A. Kren, Senior Editor

A descendant of the gas tungsten arc welding (GTAW) process developed in World War II to join light metals such as aluminum in aircraft construction, plasma cutting was born when researchers after the war restricted the nozzle opening when looking to improve GTAW.

Today, plasma cutting holds a place where conductive materials must be sliced. But just where is it most effective, and how does it hold up against popular laser and waterjet cutting competitors?

To find out, MetalForming interviewed Dirk Ott, vice president of mechanized plasma systems for Thermal Dynamics Automation. He provides expertise on how plasma cutting compares to laser cutting in cost and other areas, why an integrated, single-source system makes sense, and how fabricators can leverage the advantages of the technologies together. 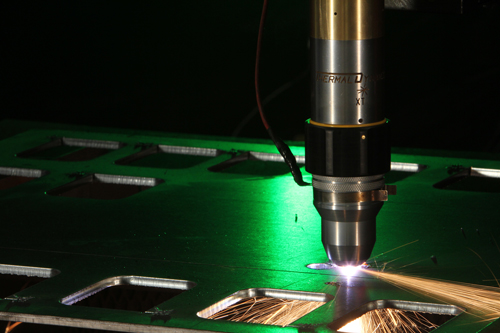 Though typically employed on inches-thick material, “plasma cutting can be very effective in a material thickness range of 2 to 6 mm,” Ott says. “As long as cuts are not overly intricate and detailed, plasma cutting is more cost-effective in this range.”

Any comparison between the processes must consider economics, as laser cutting systems have an initial cost at least double that of plasma cutting systems, with the cost difference increasing when adding laser cutter power and speed options, or when specifying a fiber laser. When pricing a 5 by 10-ft. worktable, an investment of roughly $100,000 will deliver a plasma cutting system that handles material to 12 mm thick. Also, keep in mind that plasma cutting offers an option on reflective metals, which, in some cases, adversely affect laser performance.

As Ott mentioned, laser cutting machines offer better overall precision, sometimes as much as three or four times better, depending on material type and thickness. For intricate shapes on thinner materials, laser cutting machines should get the call, he says. That’s due to the miniscule kerf width, or width of the cut material. On thicker materials and plates, the laser cutting speed advantage disappears, and often so does the need for intricately cut, precise shapes. Here, plasma cutting machines represent the cost-effective option. Also, Ott notes, as sheet becomes thicker, and also true for plate, the small kerf inherent in laser cutting proves disadvantageous.

“If a laser cutter produces small, intricate parts on thicker material,” he says, “they become a pain to separate...they get stuck.”

Stainless steel and aluminum represent other areas where plasma cutting provides an effective alternative to its laser counterpart on thicker sheet and plate.

Another important issue in the plasma-versus-laser discussion: maintenance.

“Laser cutting machines use higher acceleration than plasma cutting...to as high as 4 g,” says Ott. “That translates to greater machine-maintenance requirements. Motors must be changed more often, for example.”

Also, laser components tend to be more delicate, translating to damage from wear and tear or from material hits or drops. 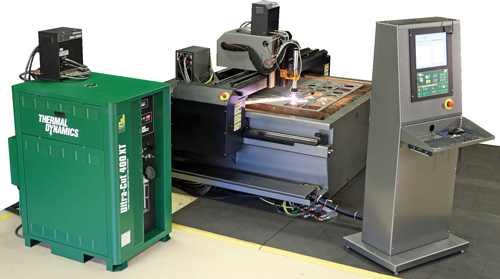 Sole-Source Systems May be Best Option

A plasma cutting system typically consists of a table, power supply, gas boxes, the torch, height control and the CNC package. Dating back a decade or more, Ott notes, many times these separate components were mixed and matched to produce the system. While integration from separate sources still occurs, Ott believes that an integrated system from a sole source provides the most effective solution, offering improved cut quality.

“In the past,” he says, “an equipment OEM bought a power supply from company A, a height control from B, and the CNC package from C, with the OEM tasked with combining these components. An OEM really needed to understand each of these components in order to produce a well-performing system. For example, the heart of the system, the CNC package, controls the power supply, the plasma system and the height control. The height-control system normally comes with little or no performance information, as all of that must come from the plasma-system manufacturer. Often, the plasma-system provider supplied limited information on that to its fabricator customers. This held true across the other components as well—not enough information transfer between the component manufacturers and the OEMs. So system performance suffered.”

Hole sizes and locations, important cutting parameters, provide an example of the benefits of a single-source integrated system.

“Hole optimization requires a very close interconnection of the CNC, the height control and the plasma system,” Ott explains. “Without that, a user couldn’t repeatedly produce the same holes.”

Given enough volume in thin and thick material, adding plasma cutting systems to on-hand laser cutting capability, and vice versa, may prove beneficial. Material would route to each type of machine based on criteria such as that suggested above.

“A fabricator may need to cut 6-mm-thick stainless steel or aluminum, for example, requiring small, intricate shapes but not needing an intricate outer contour,” says Ott, providing an example of where the two technologies can work together. “With high labor and operating costs, fabricators don’t want to waste valuable time making a long cut with a laser. Do that on the plasma machine, then switch to the laser.”

Here, Ott points out machines employing both plasma and laser cutting technology, as well as machines combining plasma and waterjet cutting, thus enabling the advantages of each technology in a single unit. Fabricators perhaps with limited floor space may consider such a system, with a lower cost than that of two separate machines.